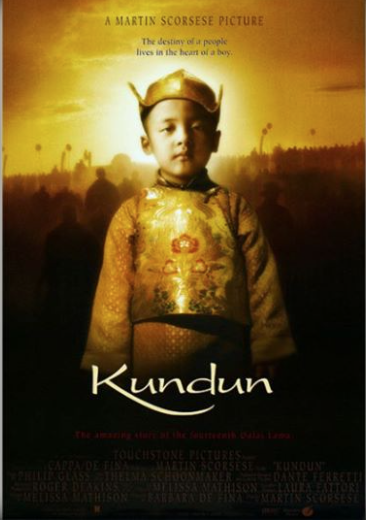 Screening and discussion of the film Kundun in commemoration of the 60th anniversary of the Tibetan Uprising of March 10, 1959. Geshe Tsewang Thinley, a Tibetan monk from the Drepung Gomang Tibetan Monastery in India, will be on hand to facilitate discussion about the film, His Holiness the Dalai Lama, and the Tibetan diaspora that began on this day.

In 1937, a two-and-a-half year old boy from a simple family in Tibet was recognized as the 14th reincarnation of the Buddha of Compassion, and destined to become the spiritual and political leader of his people. Nominated for four Academy Awards, Director Martin Scorsese brings to the screen the true story of the Dalai Lama. Told through the eyes of His Holiness, “Kundun” brings to life the account of the Dalai Lama’s early life, from childhood through the Chinese invasion of Tibet and his journey into exile.

Tibetan refugee created merchandise will be available for purchase at the screening.

Proceeds from ticket and merchandise sales benefit the 2000 plus monks who reside at Drepung Gomang Monastery in South India.